How long can you really stare at perfection? When everything is exactly as you could imagine it, what's the point in continuing to look? Imperfection, meanwhile, prompts a continued gaze, even if it's only to figure out whether you like it or not.

This is the appeal of the Instagram cakes heaped with globs of garish frosting, photographed with a harsh shine—at times, unsettlingly zoomed in. Welcome to the lurid side of cake Instagram, where there are no blankets of fondant, no buttercream spackled into submission, and no faux marble surface for naturally lit flatlays. This is the part of Instagram where food gets weird. 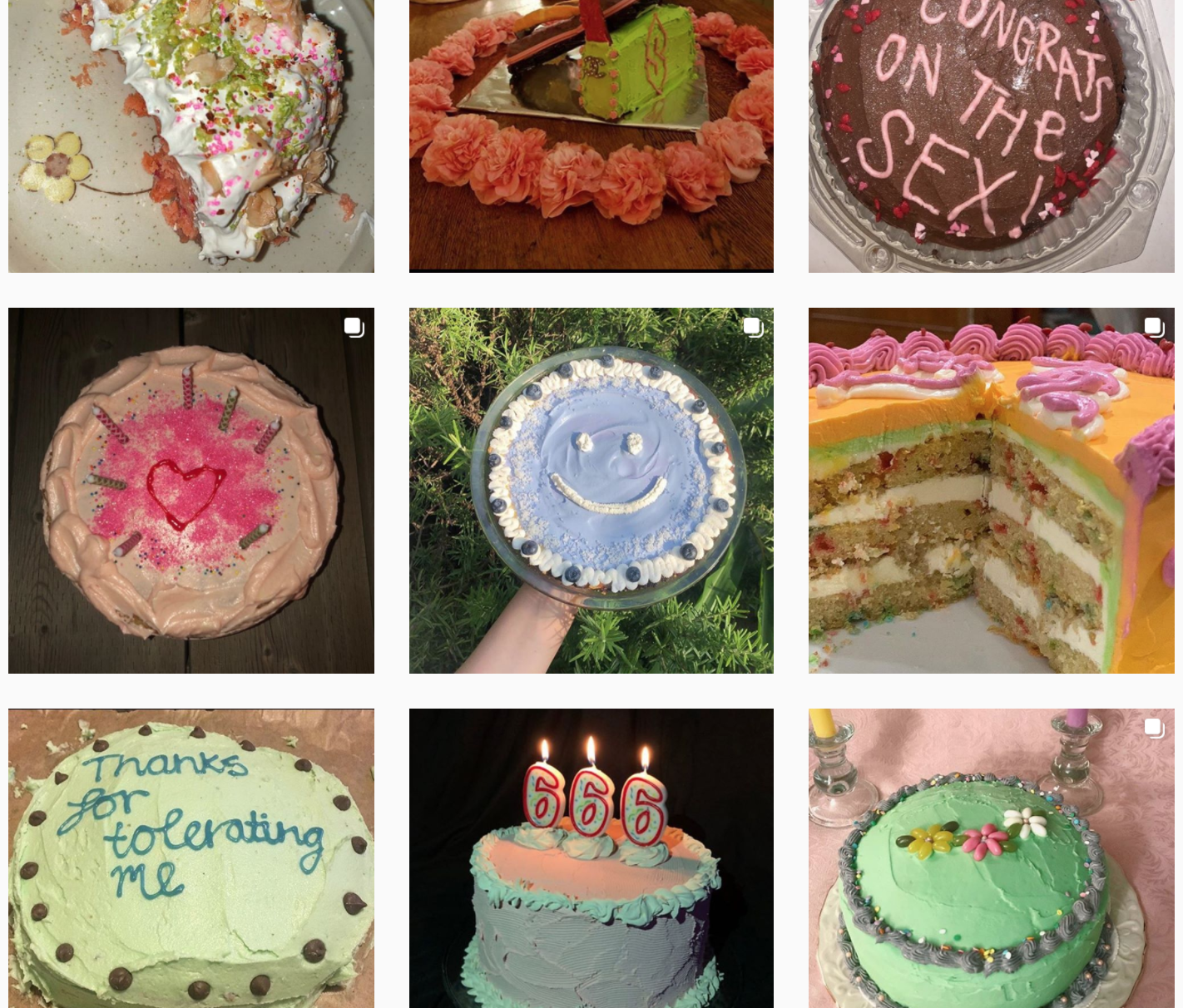 What makes a "hoe cake"? Artist and designer Sara Sarmiento, who started the Instagram @hoe_cakes in late 2019, knows what fits her page when she sees it. When she started following baking accounts during a period of unemployment, "the only ones that really caught my eye were the disastrous, really messy ones," Sarmiento said. Hoe Cakes, which now has over 15,000 followers and serves as a nexus for the experimental cake niche, became a place for her to collect the cakes she found the most beautiful.

These are cakes that melt, shine, and drip—that are topped with cigarettes (and posed with a foot holding another cigarette), or bunnies humping, or the word "bitch" in rotund scrawl. They are lumpy, smeared, and half-destroyed. They could be an ornate fever dream of fruit and frosting, or a simple collection of whorls as if a tie-dye shirt became edible. The cakes are shot with flash amid fridge interiors or cluttered tablescapes, often so low-resolution they evoke the early days of single-megapixel point-and-shoot digital cameras. They may be immediately unappealing to some, but they look like nothing else on food Instagram.

"Instagram food" is now a pejorative used to refer to food made to go viral. The writer Amanda Mull once described it, cronuts and all, as a "sad, sparkly lie" that turned consuming into a "status performance," since the food doesn't need to be eaten—let alone taste good—to be Instagram fodder. A side effect of this made-for-Instagram culture is that foods blend into an indiscernible swirl of dye, buttercream, and well-lit, newest-iPhone-quality photos. "[T]his is the nature of the Instagram beast: People want the cake they saw someone else have," writer Alicia Kennedy commented in a 2018 piece about the homogenization of the dessert world. Instagram cakes as we've come to know them are polished, and to make one requires abiding by a set aesthetic.

The energy in this part of the Instagram cake scene is different. Its lack of veneer is irreverent, like a shitpost selfie, the flash illuminating every pore. A corrective to the idea of "Instagram food," these are cakes nonplussed with perfection.

"I would definitely say fairly chaotic," said ceramic-artist-turned-hobbyist-baker Alli Gelles, describing the cakes she shares as @cakes4sport. Gelles's maximalist sculptural cakes have become some of the most recognizable in this niche. Fruit, frosting, and sprigs cover every inch, and sprinkles of edible glitter make them sparkle like a butterfly clip from an earlier era of Claire's. "A lot of the imagery, I think, is based on my Y2K bedroom… When I started working in this 'anything goes'-mode, I started reverting back to that," she said. In ceramics, Gelles prefers when she can create without obsessing over technicality, and that approach extends to cakes. "Because I'm working from an artist lens as opposed to a professional baker lens, [it's] almost like the rules don't apply."

Instagram's experimental cake niche is growing. Follow Sarmiento and Gelles, and your recommendations will fill with accounts going similarly galaxy-brained. Caitlin Palmer began making cakes in May to cure boredom and made the account @c4k3l1n to keep track of them. Palmer uses the page to share her work and to interact with other cake makers, all of whom have been willing to share tips. "It's like unprofessional people who are just trying to make very intricate, complicated cakes for kind of the first time," she said.

"For the most part, I think people are just like, 'What do I have around here?'" Palmer said. She puts her cakes on 30-cent, reflective, disposable pizza pans and takes photos with her phone, preferring flash for its ability to make cakes look "weirder" and "more sculptural." This type of unrestrained flash is, of course, what incited responses of horror to Martha Stewart's early food tweets. While photography is similarly pragmatic for Gelles, it fits into her broader mindset: "If that's really the thing that people aren't into, then you're not gonna like these kinds of cakes—it's not polished at all." 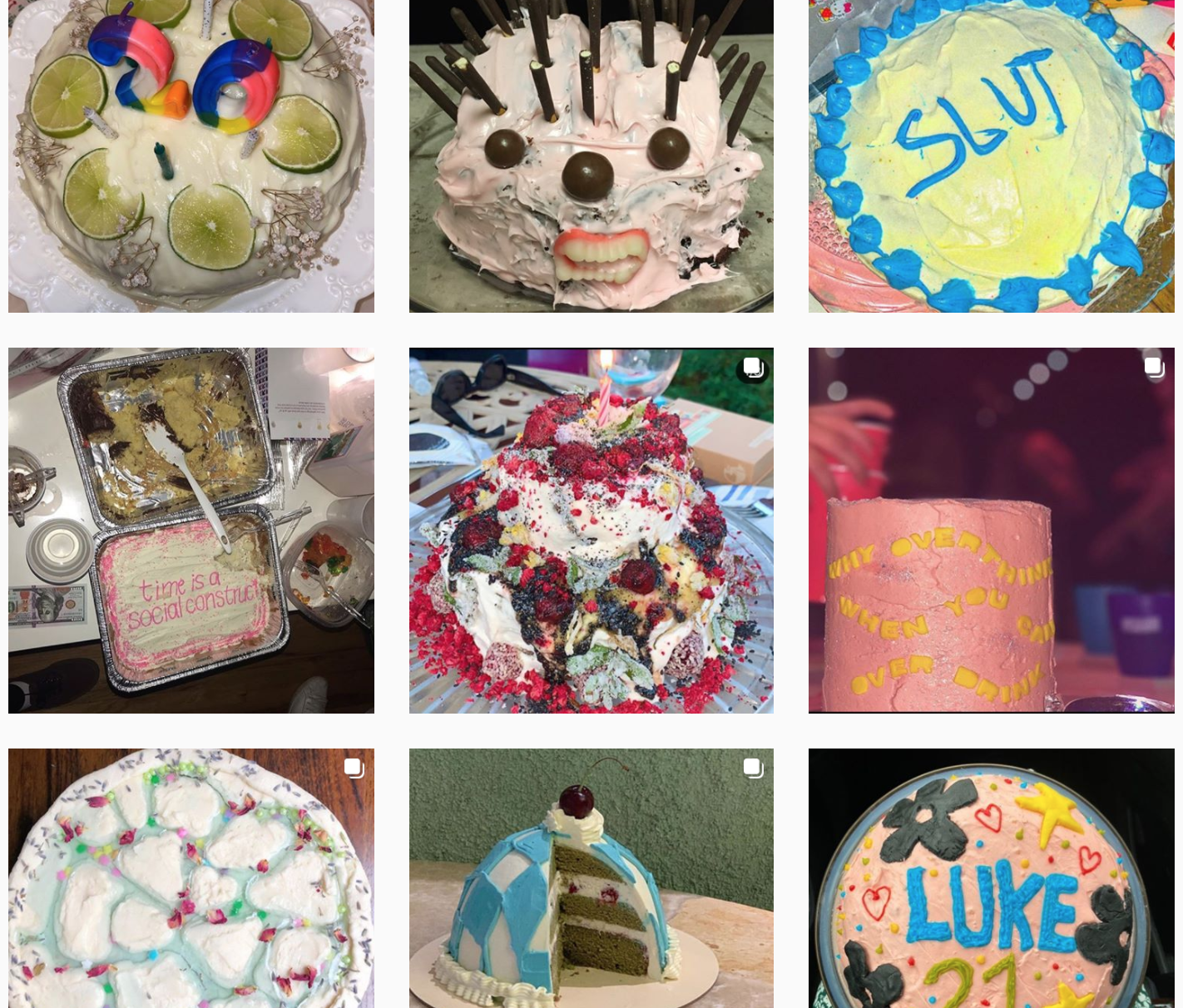 Instagram has tried to convince us of a lot of lies, many of which we've internalized: that "flat tummy tea" is a good health choice; that Glossier products make you look like a Glossier girl; that homes exist without clutter; that some people just wake up "like that"; that food needs to look a certain way to be good. (Dave Chang uses the phrase "ugly delicious" for a reason.)

But what if food is messy and unsettling to look at? What if we took in the ugliness, questioned why we dislike it, and let it simmer, like leaning into a painful yoga pose? Nobody would die, though food stylists and influencers everywhere might gasp in shock. After, though, we might be awakened to a world of Instagram food that's weird and free, without the inexplicable standards created by influencers and brands. 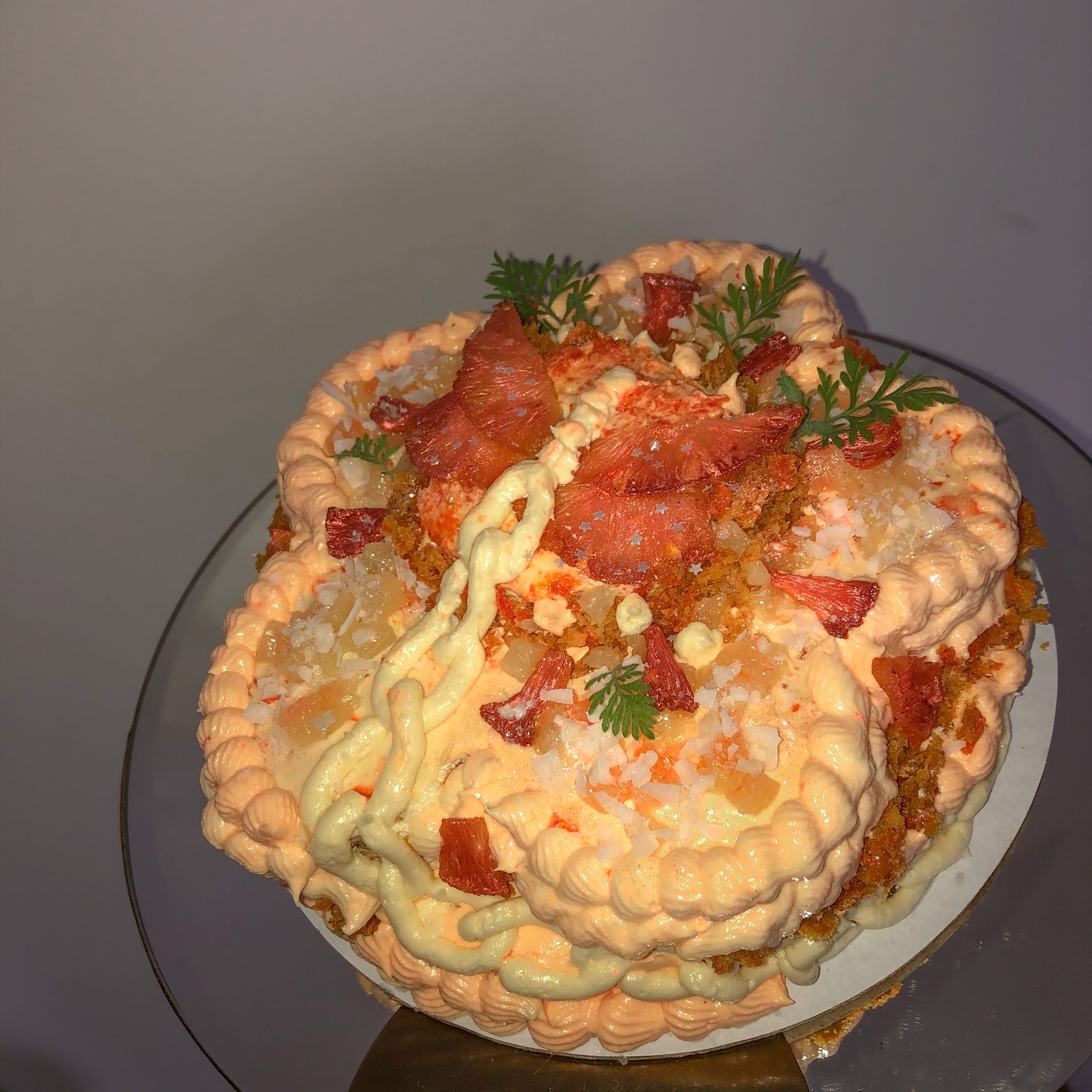 Sarmiento loves the "glorious lump of frosting" when new bakers send her their work. To her, the barrier to entry to these cakes is lower, and there's no gatekeeping. "I want people to feel like anybody can make art," she said. It's not a coincidence that Sarmiento, Gelles, and Palmer (who works at a museum) are all part of the art world. "I think a lot of people who make the most beautiful cakes—the ugliest, beautiful, sluttiest cakes—are artists and queer people," Sarmiento said. To her, people are seeing cakes in a new light as an art form that's not just visually entrancing, but also purposeful.

Unlike ceramics, which requires special equipment and plenty of time, the satisfaction of making and decorating cakes is accessible and immediate, Gelles said. Though the idea of creating art in order to sell it has tripped her up in the past, taking on cakes as a hobby lets her create for the sake of creating.

"As far as cakes, it's like, well, if I make it, somebody's gonna eat it," she said. "Even if they don't get it, even if you don't think this is a pretty cake, you're at least going to eat it. You're going to enjoy it—and who doesn't like cake?"

According to Our Editors, 2021 Is All About These 11 Brands

This Risqué New Trend Is Unpractical (No Underwear, No Bra), But I Still Love It

According to Our Editors, 2021 Is All About These 11 Brands